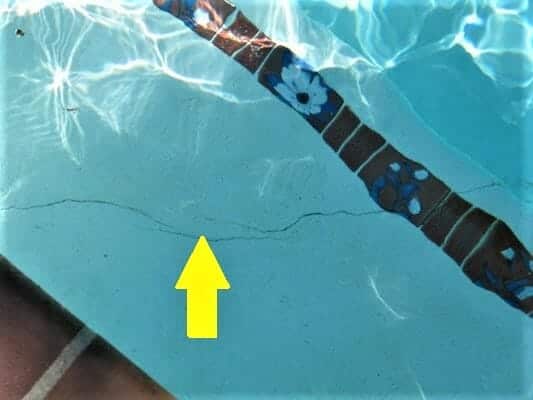 The majority of in-ground pools are constructed of 6 to 8 inches of gunite or shotcrete, a concrete type of material, spayed over rebar steel reinforcement. Contractors often refer to in-ground gunite and shotcrete pools as concrete pools, verses in-ground fiberglass or vinyl lined in-ground pools.

The top edge of a concrete pool body usually has an extra wide area (about 12 inches) of gunite or shotcrete that adds more strength to the top rim of the pool shell; this top area is called a bond beam. Overall, in-ground concrete pools are usually very strong and last for many years, especially with proper maintenance. 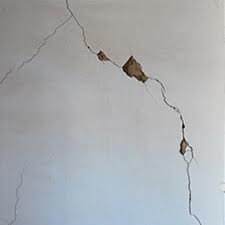 Not all pool cracks mean that the pool is leaking, i.e shrinkage cracks are normal; they are shallow and just part of the curing process that occurs when the pool is first shot with gunite or shotcrete.

If a crack is a structural crack, there is a pretty good chance that the pool is leaking or will eventually leak. These cracks occur in the shell of the pool and may appear in various locations. The cracking may be vertical or horizontal or on the sides or bottom of the pool. The majority of structural cracks running through the concrete (gunite or shotcrete) will also be mirrored through the plaster coating or the tile area  over the bond beam. Pools that are significantly out of level and also has cracking, tells you that problems exist; potentially structural cracking and leaks.

Surface cracking is basically observed in the plaster and for the most part is not a leak issue. These surface cracks are normally thought of as maintenance or repair types of issue. As a homeowner or buyer, it wise not to jump conclusions that surface cracks actually runs through the shell of the pool and that it’s leaking. 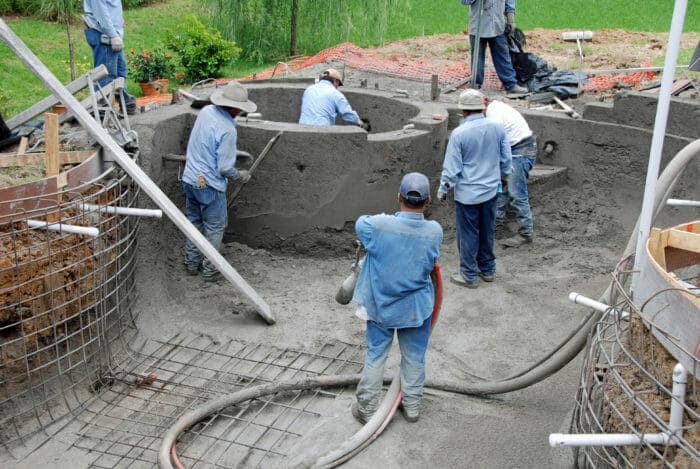 If a pool is not properly designed and engineered, then the likely hood of the shell to crack increases. Often the first flaw of engineering a pool is failure to test the soils and engineer the pool based on the soil load bearing capacity and stability. Soils with a clay content, usually called expansive soils, are one of the more problematic types of soils. Additionally, poor design of the areas around the pool plays a part in the overall picture; retaining walls and the concrete deck areas around a pool are a perfect example.

Failure to follow the construction plans when building the pool or taking shortcuts is a large part of why a pool will crack. Simple things like adding too much water to the gunite or shotcrete when spraying it on the rebar or failure to adequately tie the rebar in place when placing the rebar, may cause cracks. Even not keeping the pool sufficiently moist after the concrete is sprayed on, especially in hot climates or hot days will cause cracking.

Soil issues are another major reason for a pool to crack. If the contractor left uncompacted soil when digging the pool hole and then built the pool on this poorly compacted soil, it may result in cracking. Soil movement, especially on hillsides, likewise may cause cracking; on flat lots with expansive soils or even earthquakes can cause a pool to crack. 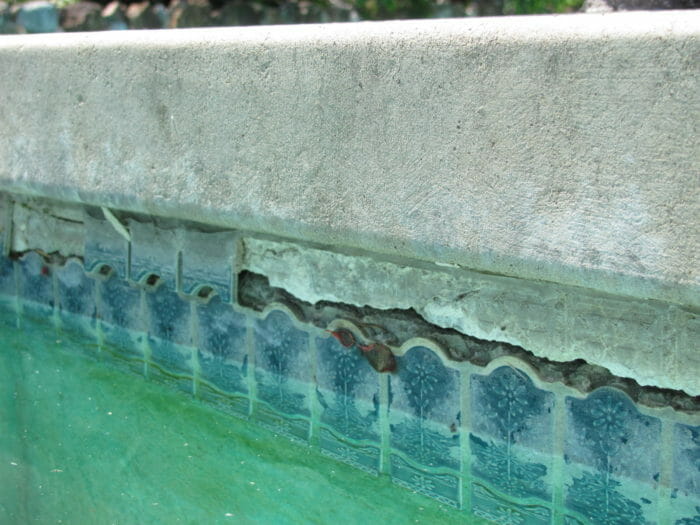 One of the most common areas for a pool to crack is at the bond beam area. Usually this area is where the tile circles the pool at the waterline level. Around many pools there is a concrete walk or deck area and if there is not an expansion joint or a way for movement to occur between the concrete deck and pool, a crack may occur. The reason for this is the expansion and contraction of the concrete deck due to wide temperature changes; or soil shifting will put tremendous pressure on the bond beam and then it cracks.

Several indications that this may be happening besides seeing the crack, is loose, missing or cracked tile. Another may be that the coping is cracked, lose or damaged.

Cracking due to “Rebound”

Material that fly’s off or bounces of the rebar and existing concrete is often called “Rebound’” It has a higher concentration of sand and less cement than the original mix, thus it is weaker than the original material. Contractors will often reuse this rebound material to save material and labor. They may use it on the bottom of the pool, in the step entry areas of the pool, or the seating benches or ledges in the pool that’s below water.

This practice of poor workmanship may result in weakened areas or cracks at times. If you look closely you may see crack evidence in the entry step area of many pools. When the rebound caused cracks are at the entry step area, they do not always go through the entire shell, therefor there is no leak.

Delamination is another issue with rebound materials, for they do not always bond fully with other gunite or shotcrete that has been shot. The bonding problem relates to the fact that rebound material has less cement and more aggregate and sand.

Both the shell and the plaster in a pool may incur shrinkage cracks. It is very common for concrete to experience shrinkage cracks when it is first placed. Excessive temperatures, improper curing, wind or excess water in the concrete mix can also contribute to shrinkage cracking. These types of cracks are generally small, shallow, in random locations and do not result in leaking.

Cracks may also appear in areas where the concrete covering the rebar or piping is insufficient. When the rebar has insufficient cover, then there may be a pattern of cracks that reflects the rebar pattern. Over time rust my come out of these cracks and that can be a significant concern, for as the rebar rust it expands in volume; up to four times its diameter. This expansion creates tremendous pressure on the concrete, causing spalling, cracks and damage.

Expansive soils swell up when they get wet and shrink when they dry. They contain clay in them and can easily exert pressures on a pool shell of 5,000 to 10,000 PSF (pounds per square foot) or more; this can cause damage and cracking of the pool body. With all this pressure, not only will the body crack at times: the pool itself will be lifted up. It may push a pool up 1 inch, 2 inches, 3 inches or even more and usually it does not push up evenly, so the pool will not remain level.   ( Learn more about expansive soils ) 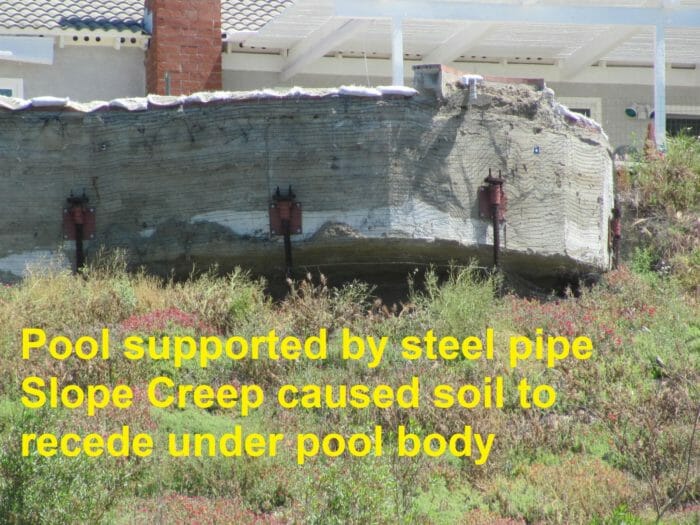 Pools on hillside that have slope creep may shift or move because the soils themselves are shifting; this soil movement exerts stress on the pools’ shell which may result in cracks.

The photo on the right shows a pool that is being supported by steel columns attached to the side of the pool which was original an in-ground pool. In the case of this particular pool, the earth was moving downhill at a rate of 4 inches per year and the depth of the layer of soil moving downhill was approximately 70 foot deep. Presently there has been slope stabilization work done on the slope and it is hoped that there will be no more slope creep.   (Read more about slope creep) 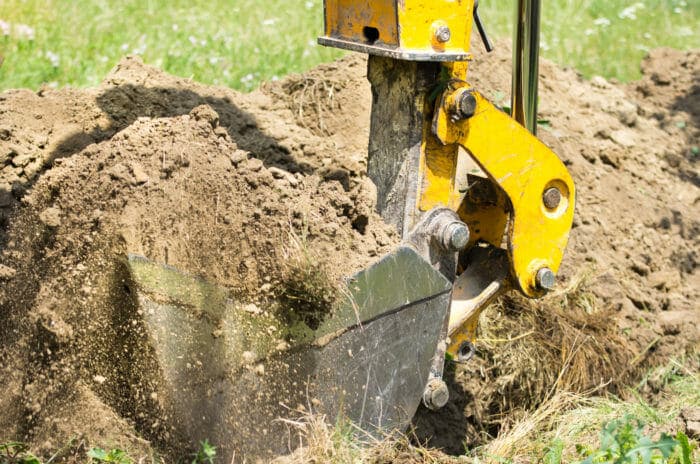 Pool contractors face the problem of loose fill on a regular basis, for if the soil which a pool sits on is not well compacted the pool will settle. It is imperative the soil be able to carry the load (the weight of the pool when filled), otherwise a number of problems will develop, including cracks.

If a contractor over excavates the hole for a pool, then compaction issues become more prevalent. Additionally, if back fill is required on the exterior perimeter area of a pool, caution must be exercised, for mechanical compaction may damage freshly shot gunite or shortcrete.

Pools built on an area that has both cut and fill soil will incur more problems than ones built fully on cut or fill. The tendency on a cut and fill area, often called a transition area, is for the portion of the pool built on fill to settle. This unequal movement leads to cracking. Hill side homes have more cut and fill problems than those build on all cut or all fill.

Is there a leaning retaining wall near pool?

If there is a retaining wall near a pool and it appears that the wall has shifted or is leaning, then it may be an indication that the soil in the area is moving. One of the reason that a retaining wall leans is because of slope creep, which is basically the top layer of a hill moving downward. The speed may be only a ½ inch per year or could be 4 inches per year and the depth of the slope creep may be only a couple of feet deep or even the top 70 feet may be moving downhill.

Many older residential areas have pools built on soils that never had a soil test before the pool was constructed.

In newer areas, there may have been soil test conducted where the house slab or foundation was built, but none on the area where the pool was built. The problem with this is that the pool contractor may have used the soil test results from the house pad area, rather than pay for a soil test where the pools is going to be built

When a crack is “V” shaped, wider at the top than the bottom, and it’s a vertical crack on the wall of the pool; then there is a strong possibility that that one of several things have occurred.

“V” shaped cracks are one of the more serious types cracks that a pool may incur and the probability that there is a leak is rather high. 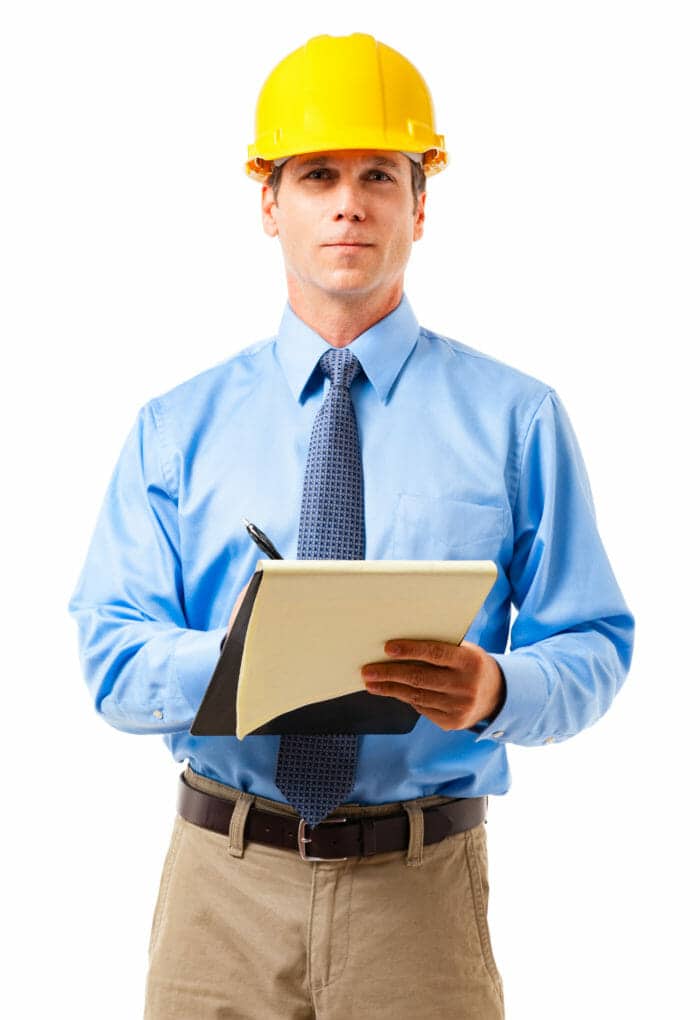 Homeowners and buyers who have concerns about a pool should consider having a pool inspection.

Qualified pool contractors and pool inspectors are a good source of information and they may recommend further investigation beyond their inspection if they feel that there is a need for pool structural engineer, a civil engineer or a geotechnical engineer. (Read about a “Pool Inspection Checklist”)

Overall in-ground concrete gunite and shotcrete pools hold up well for many years. The majority of cracks that homeowners and buyers see are in the plaster and do not penetrate through the entire pool shell or body. These types of cracks are generally considered a maintenance issues but should not be ignored

Concrete decks against a pool should have proper expansion joints so they don’t expand and damage the pool shell or coping, and cracks in the deck areas near the pool should be properly sealed; preferably with an elastomeric type of sealer.