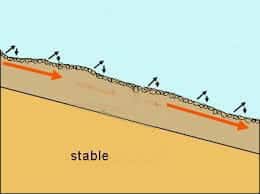 Slope creep often results in damage to a house over time.  The damage may be: foundation or framing damage, sewer line damage, roof damage, as well as, doors and window sticking, garage floor and slab cracks, cracks in swimming pools and spas, etc.

When your home sits on a lot that has slope creep, the entire home usually moves or shifts, not just one small portion.

Homeowners seldom think about slope creep because it happens so slowly, usually over a number of years and when it does comes to their attention, it’s because of problems that are occurring in their house; not because they looked out over their yard or surrounding area and said “Oh, we have slope creep.”

The speed of slope creep is very slow, unlike the speed of a landslide or mudslide; all of which might be considered to be in a category of hillslope mass movements, the same as slope creep.

One reason slope creep is so difficult to notice when its occurring is because the movement may only be 0.3cm (one tenth of an inch) to a couple of centimeters a year. A movement of just one centimeter a year would be about 4 inches in ten years. The rate of movement depends on many factors, ranging from the types of soils, steepness of the grade (hillside), the type of ground cover and vegetation, the amount of moisture / rain and whether there are seasonal freeze / dry cycles.

Keeping the concept of gravity in mind, with all things being equal, the steeper the slope, the faster the soil movement. One of the common misunderstandings about slope creep is that it only occurs on steep hillsides, but in reality, it may even occur on mildly sloping lots.

Depth and size of slope creep

When geotechnical engineers are reviewing a home that may be having soil movement, such as slope creep, they will want to know if the soil issues are site specific; just related to the lot that the home sits on or are the soil issues global, meaning the geographic area the home is in. They may think of global as being the local neighborhood or as a much larger area than the neighborhood.

The depth of the top soil layer that is creeping downhill can vary considerably. It may be only 4 or 5 feet thick, or it may be 70 feet thick and will often vary due to the formation of the layer under the top layer.

There are a number of indications or warning signs that slope creep may be occurring in your neighborhood or on your property. The following list and photos will give some of the things that geotechnical engineers and structural engineers will look for when analyzing your property and home.

One of the first things that many geotecknical engineers do when suspecting slope creep is to drive around the neighborhood checking for evidence of soil movement. They look for: 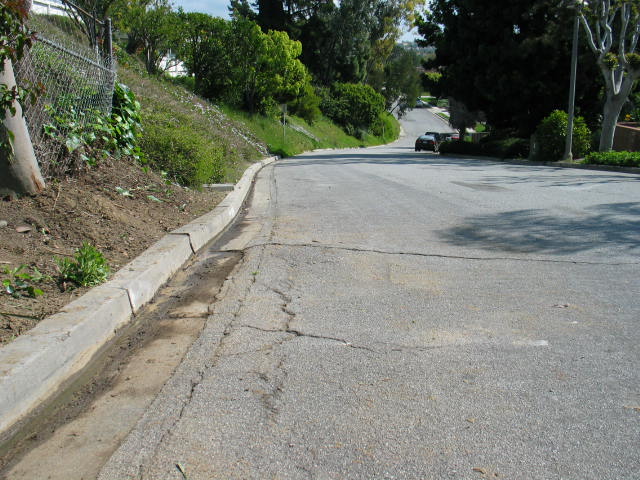 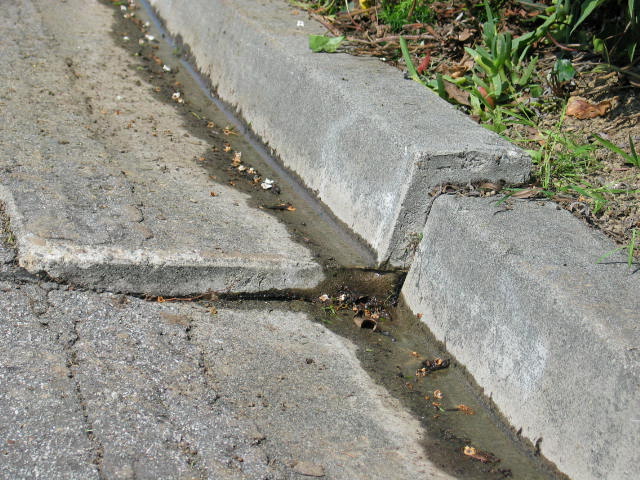 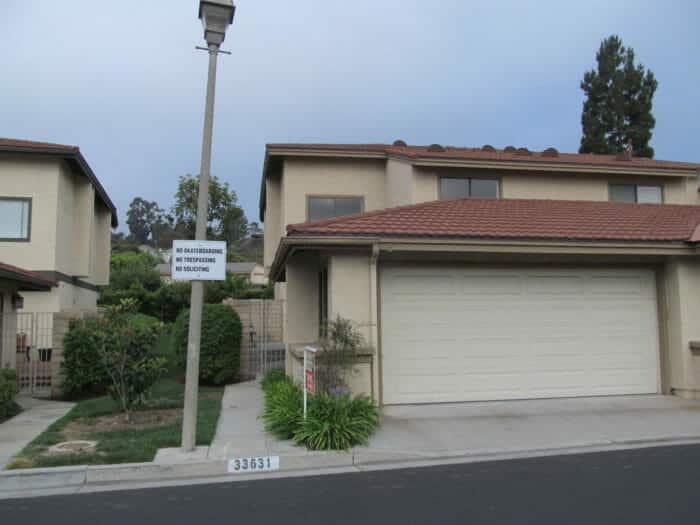 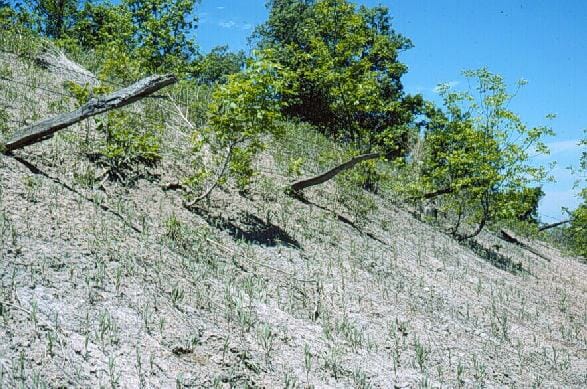 On the home site and neighborhood

One reason that dog leg shaped tree trunks are an indication of slope creep is that most trees tend to have “positive phototropism”, which is when a tree grows toward the sun light. As the soil slowly shifts downward on the slope, a leaning tree adjust by straightening back upward towards the light. 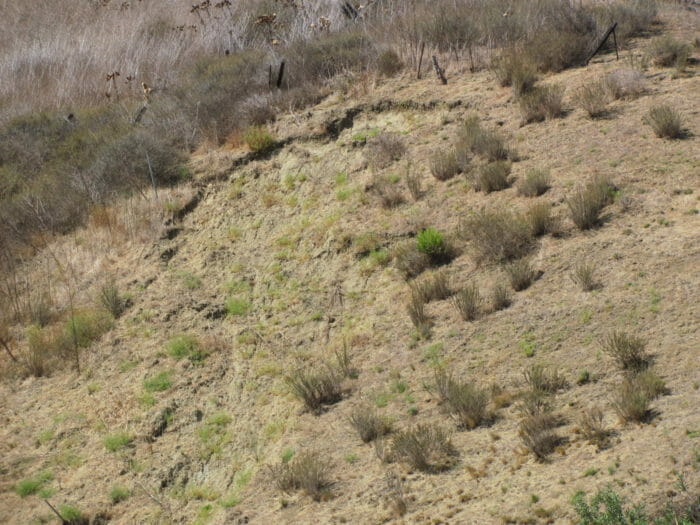 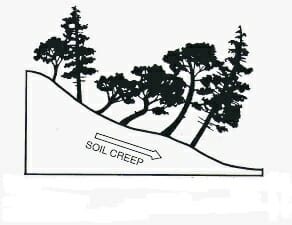 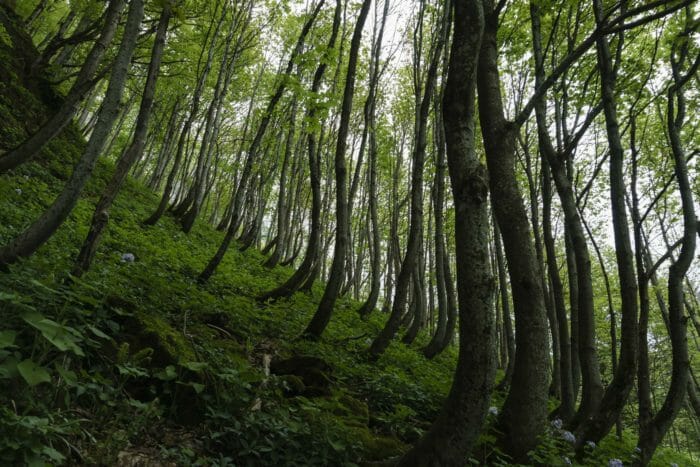 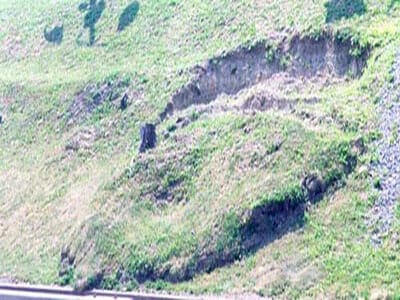 Indication of structure movement such as:

One of the more common signs that homeowners may notice is when there is a concrete patio slab poured against the house and there is a larger than normal gap between the patio slab and the foundation. One that was smaller at one point in time. 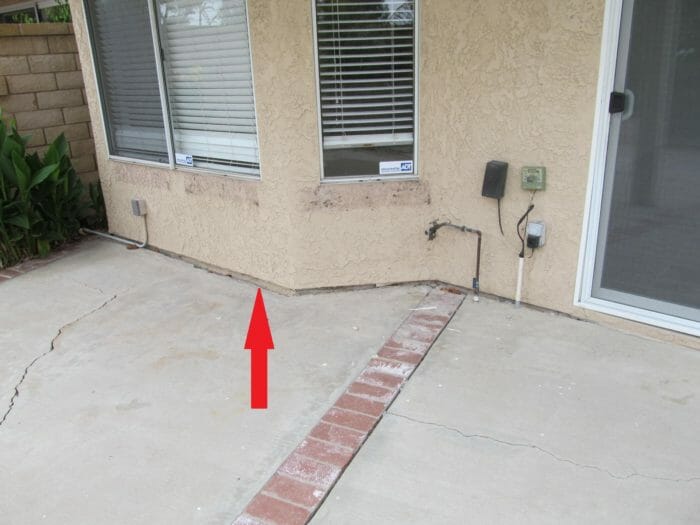 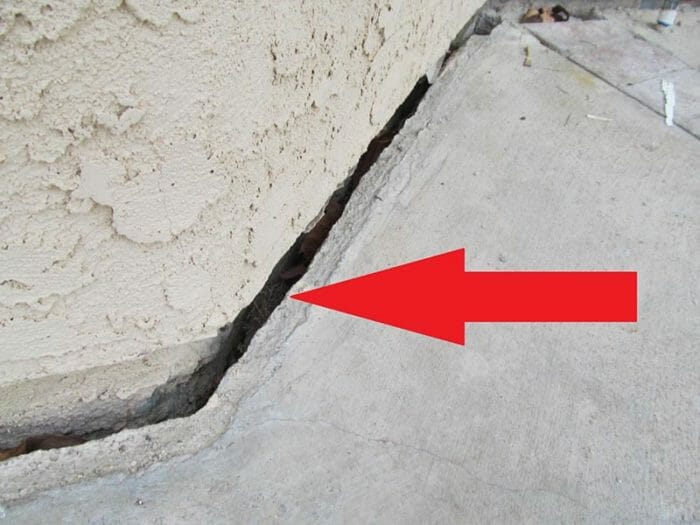 There are a number or reasons for slope creep, but most relate to one or more of the following causes.

At times there is trigger mechanisms or events that are caused by humans which induces slope instability. When analyzing what has or is causing slope creep, it is important to step back and look at what events in the area may have triggered or caused the soil to start moving.  (Read about human events that may trigger slope creep)

In a few instances a building department may “Red Tag” a home when there has been a significant amount of damage or the structural stability of the home is unsafe because of slope creep. They do this because of life and safety concerns.

Under this type of condition, a home owner must move out of their home until it is deemed safe.   (Read more about “Red Tagging)

Slope creep and damage from slope creep is usually difficult for a home owner to assess if it’s serious. When serious, the expertise of a structural engineer and / or a geotechnical engineer to analysis the situation may be helpful.

Another source of information for your specific area may be the local building depart or the city / county engineers.

Slope creep usually happens very slowly and can be difficult and expensive to stop or correct and it’s one of the more powerful forces that causes damage to homes. It, like earthquakes, landslides, tornadoes and hurricanes can cause tremendous damage to a home, except that slope creep does it very slowly, rather than in a matter of minutes.

The good news is that no one usually gets injured due to slope creep and there is usually lots of time to make adjustments and repairs caused by it.