What is radon and where does it come from? 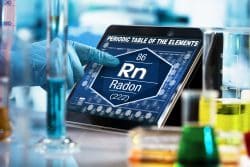 Radon is an odorless, tasteless, inert and invisible gas which is naturally emitted from the earth as uranium, decays to radium and eventually stabilizes as lead. Uranium is found throughout the crust of the earth in various quantities geographically and as it processes through its radioactive decay chain to radium is when the gas is released. The gas seeps out of the earth’s crust through cracks in rock, porous soils, or water and is eventually released into the atmosphere. Since the gas is immediately dispersed into the atmosphere it poses a negligible effect on human health. Our homes however can trap radon gas inside and pollute the indoor air quality to high enough levels to contribute or cause lung cancer.

It is estimated that prolonged radon exposure claims around 21,000 lives per year in the United States. Radon inhalation is the leading cause of lung cancer in non-smokers as it is the primary source of exposure to ionizing radiation. Without proper ventilation or radon mitigation techniques, unsafe levels of radon can accumulate in the home or business which ultimately accounts for 50% of the public’s exposure to naturally occurring sources of radiation. Smokers who also live in a high radon environment are at great risk of developing lung cancer. The EPA recommends taking action to mitigate radon if the density is 4 picocuries per liter (pCi/L) or higher. Simple at home tests can alert you to unsafe levels in your home or building.

How to Test for Radon

There are multiple tests for determining radon levels in a home or building, each with varying prices, pros and cons. A short term charcoal based test may be used to determine radon levels quickly however the directions must be followed very closely to obtain accurate results. A charcoal bag is placed in a location of the home or building with limited exposure to outside airflow such as locations near doors or open windows. If the test is placed near a draft it may not reflect the true levels of radon in the space where airflow is not present. Thus it is recommended to place these in an area with little disturbance or use multiple tests throughout the structure. The EPA recommends longer term testing for more accurate results. An internal film based test which captures particles on a sensitive film inside of a small enclosure is one popular testing kit. Both of these types require the samples to be mailed to a laboratory to perform the analysis and provide the results. Digital testing machines can be used for short or long periods and do not need to be mailed in to obtain the testing results. These devices can be moved from room to room and reset to evaluate multiple living areas, rooms, or even multiple homes and buildings. Airthings offers a battery powered continuous monitor which is highly rated and portable. View the Top Rated Radon Monitor 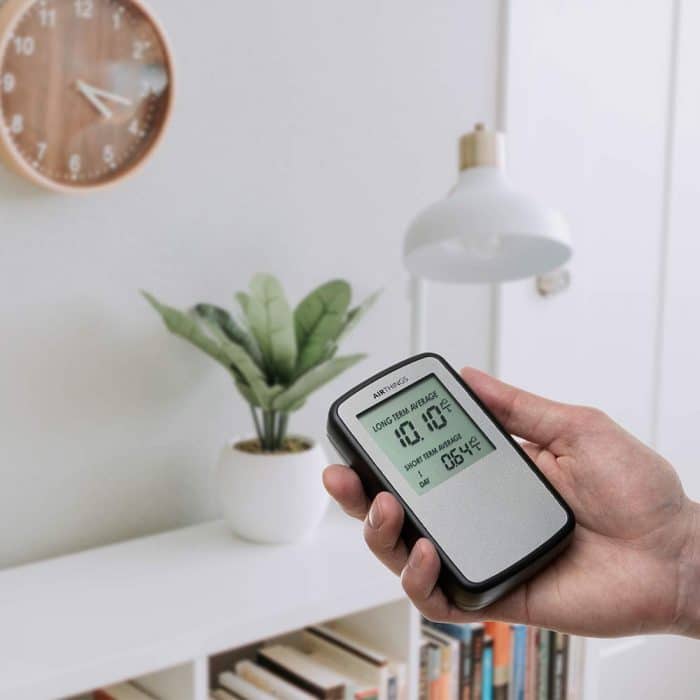 Professional radon monitoring devices are also available. Home inspectors often own these devices and offer the additional service of conducting a radon test during the inspection period of real estate transactions. These devices often cost thousands of dollars but can accomplish the accuracy of a long term test in a much shorter amount of time.

Since radon usually enters a home by exiting the earth in a home’s crawlspace or in the earth beneath a concrete slab or basement floor, usually the mitigation will focus on this area. Radon can penetrate through concrete, wood, plastics, insulation and flooring and enter the home even if there are no visible places of entry. Certain materials can block radon and many new homes in radon prone areas use these materials in the home’s construction. If your finding out about a radon exposure issue in an already constructed home or building then some of these materials cannot be properly utilized. There are however many techniques to drastically lower the amount of radon under the home usually by use of a fan to depressurize and exhaust the gases out above the roof of the structure. Radon fans are rated for continuous operation and require a visual light indicator so the home owner or property manager can verify the unit is running. 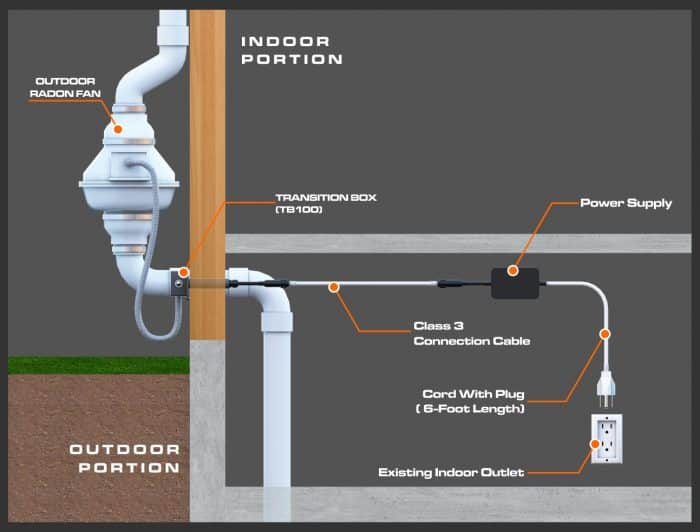 A general first step for decreasing the quantity of radon gas from under a home is to check for adequate ventilation. The minimum amount of ventilation area must not be less than 1sq/ft for each 150sq/ft of under the floor space area. It is possible that if the ventilation is not adequate after meeting this requirement, there could be a reduction of radon gas actually making it into the home. If you are within the 2-4pCi/L reading then this could be a cost effective first step. If that is not the case, many radon contractors will employ the depressurization or essentially vacuum technique. In this scenario usually a net of perforated pipe is assembled on the bare soil throughout the crawlspace all connected back to one pipe which exits out the side of the home. The entire crawlspace and piping is then covered with a membrane and glued to the sides with a polyurethane sealant and all of the seams are sealed with a special tape or more polyurethane. Next on the exterior of the home a radon fan is installed and an additional pipe vents the exhaust from this fan to a high enough point above the roof line to satisfy code requirement. The fan runs continuously sucking air from the holes in the perforated pipe under the membrane and vents the gas out into the atmosphere. These fans will often include an indicator light in an area of the home that is visible as to alert any occupants of a fan failure. This method can be extremely successful however it is very important that the installation and sealing of the membrane is done properly for full effect. Sometimes fans may be installed in the attic and routed out through the roof. Other systems have the piping exit the home as low as possible and route the fan and piping on the exterior of the home to avoid a roof penetration. 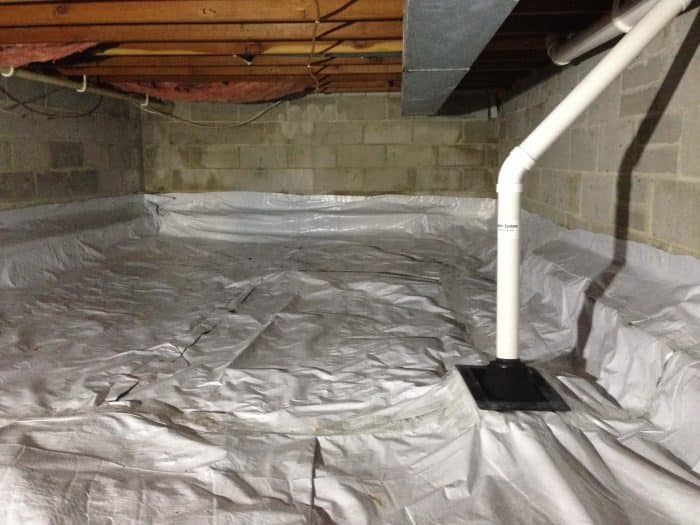 A common technique for homes with no access to a crawlspace is to use a similar approach as sump pumps are used for pumping out water under a foundation. One or multiple holes are cut into the concrete and earth is excavated out of the hole. Perforated piping is installed deep into the earth and routed outdoors to a radon fan to suck out the air under the concrete. The hole is then sealed back up. The idea is that the fan is strong enough to suck the air out through small cracks in the soil or rock beneath the concrete and reduce the levels of radon to an acceptable quantity. In the case of extremely high levels in a basement, the above crawlspace technique can be used as well however in this case the pipe is laid on the concrete and the membrane is secured to the basement walls. In homes with basements and crawlspaces a combination of the two techniques can be used as well (pictured below). 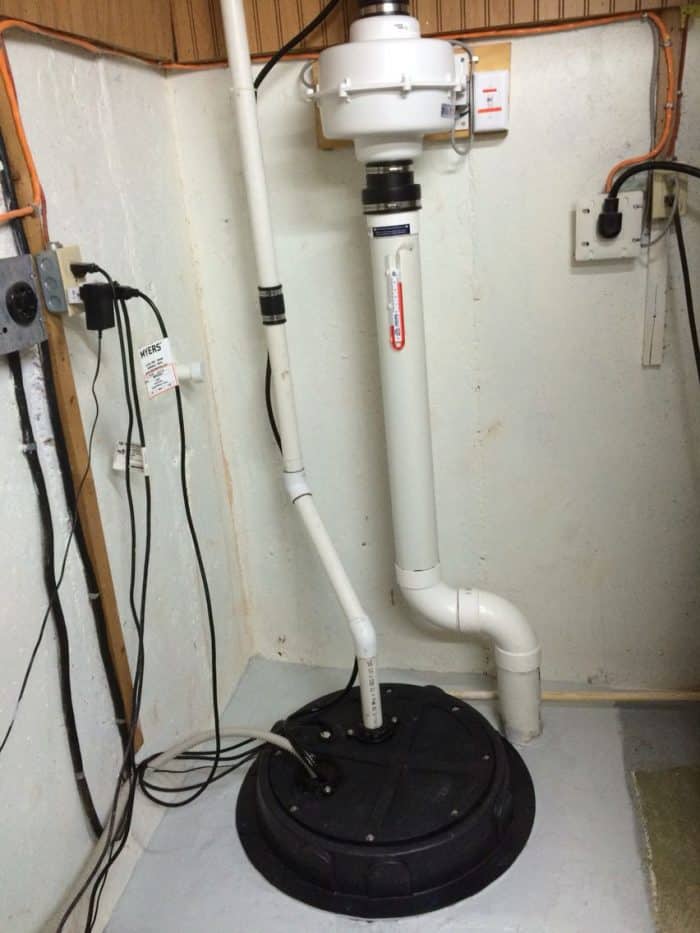 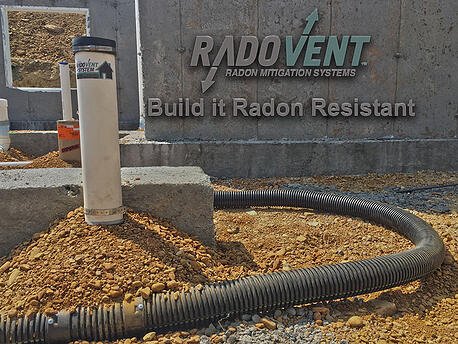 Builders today can follow detailed instructions from the EPA on how to include radon mitigating building techniques during home construction as a proactive measure to hopefully keep radon levels low enough so no further mitigation is required. If home builders are planning to build in an area marked by the EPA as a medium or high zone this proactive approach is recommended. The main method is also depressurization and extraction of the gas before it has a chance to even enter the structure or foundation. By setting a very porous layer of gravel at least 4” thick and covering this with a membrane, the gas can be more easily sucked out from under the foundation and vented above the roof line. Additionally, caulking and sealing of as much as possible in and around the foundation can contribute to lowering the amount of radon buildup in the home. 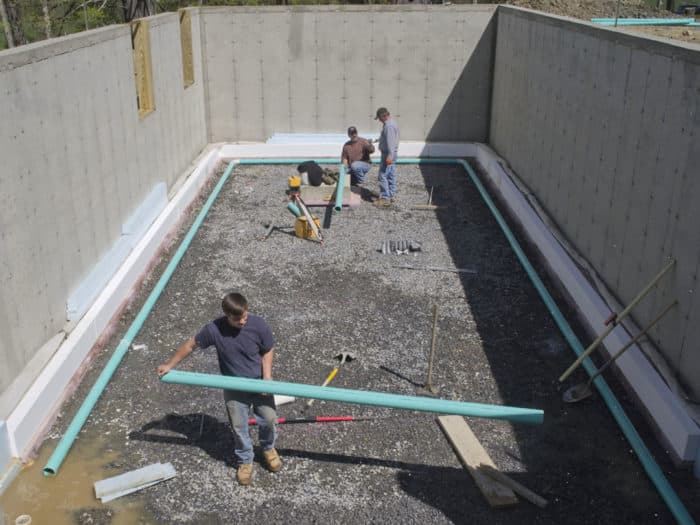 The EPA maintains a color coded map to help owners, builders, and inspectors know ahead of time if the home is in a potentially high radon zone. Since ventilation and construction techniques vary so much from home to home, even two homes next to each other in a high radon zone may have drastically different radon levels so it’s important to always get an accurate tests completed to analyze your specific situation. 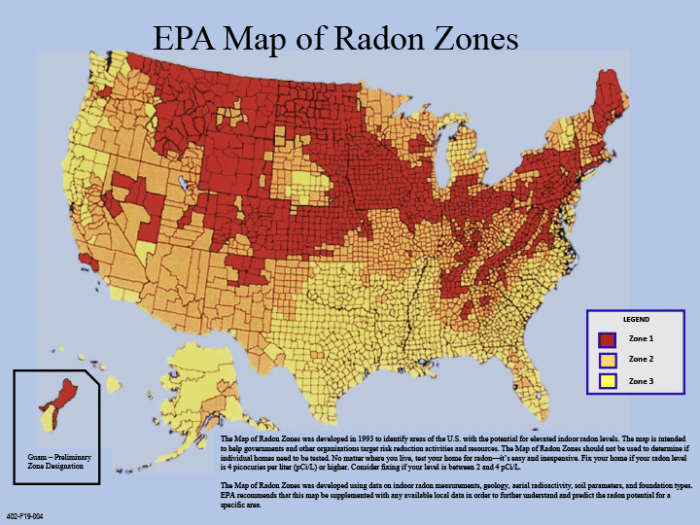