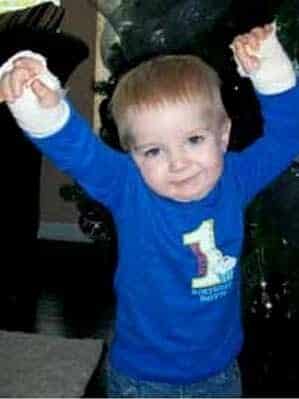 More cold weather this week has many families staying close to the warm, cozy fireplace.

But some types of fireplaces are proving to be a real danger, injuring dozens of children each year.

In just the last four months, Riley Hospital for Children at IU Health alone has treated nine children after they were injured by their family’s fireplace.

Heather Lipe and her family, will never forget the cool November day three years ago when she clicked on her family’s gas fireplace to take the chill off.

“I was making dinner, he was playing…my husband got home and they were hanging out in family room, chatting about our day,” said Lipe.

Her son, Nixon, was just shy of his first birthday.

Heather says it all happened so quickly.

“He started just screaming horrifically. We didn’t even know…we were, like, ‘What’s going on?’ We were looking at the floor trying to figure out if he’d fallen or cut himself and then we were, like, ‘Oh my God, the fireplace!'” she said.

In a split second, Nixon reached out and put both of his hands on the glass front of the fireplace, causing second degree burns on both palms.

Nixon was at Riley Hospital for Children at IU Health for two weeks undergoing painful treatments. For a year, he had to wear protective compression gloves while his hands healed. 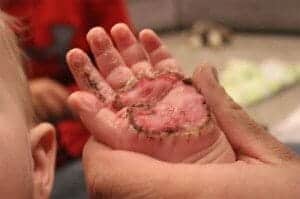 Severe burns are some of the most painful – and long-lasting – injuries, according to Dr. Rajiv Sood, director of the Burn Center at Riley Hospital for Children at IU Health. He is also the doctor that treated little Nixon.

“He had palm burns, which are the most typical, because kids will put both hands right up to the hot glass,” Sood said.

Sood is frustrated that after so many injuries there is still no federal mandate for fireplace manufacturers to come up with a way to prevent burns from the glass, which can reach peak temperatures between 400-500 degrees, hot enough to cause a third-degree burn in an instant.

“I just can’t believe that when we know that something can injure, and there have been over 2,000 injuries over 10-year period from one of the major studies, that is a significant percentage of kids who could avoid injury,” Sood said.

An Internet search shows case after case of small children with their little hands bundled in bandages, or their faces clenched by searing pain from a recent burn from a warm, inviting fire.

The fireplaces in question are all gas-operated, glass-front fireplaces, which are increasingly more popular in newer homes and especially in the Midwest.

Not only does the glass heat up quickly – 400-450 degrees in just ten minutes – but can also take over an hour to cool down.

Brian Adams, owner of Godby Hearth and Homes on the west side of Indianapolis says his employees talk to hundreds of families each year about the safety issues surrounding fireplaces in their homes.

“We discuss the temperature of the glass and how hot it gets. The key is at least so people have the awareness that they need to monitor their children and they shouldn’t leave children unattended around them,” Adams said.

He says the fireplace industry has been aware of the problem of injury-causing heat on fireplace glass doors for more than 10 years and many fireplace manufacturers have even self-regulated to prevent injuries to children. Adams says he is glad there is finally going to be a more permanent solution and one that makes it easy for manufacturers to comply with.

While some argue that better parenting can prevent these terrible accidents, Sood disagrees.

He says families are also left guilt-ridden when their children are injured under their care.

Nixon’s mom, Heather, says she was always worried about safety in her home, but was more worried about her young son falling on a sharp hearth around the fireplace than the glass itself.

“I thought, you know, the glass is on the fireplace, I’m thinking it’s like the oven, this safety shield, it’s fine,” she said.

Today, three years after suffering the horrific burns, Nixon can use his hands without his painful tiny gloves or the splints he still remembers how to put on.

But until he is 18 years old, he will undergo yearly physicals and potentially even more surgery if his scarred hands don’t keep up with his growth.

The fireplace that severely injured the boy now sits unused, but is a constant reminder to a danger the Lipes family never knew was in their home

Agents, Buyers and Sellers: Are you watching to see if there may be a risk of some one getting injured or burned at your own home or at one that you are buying or selling?