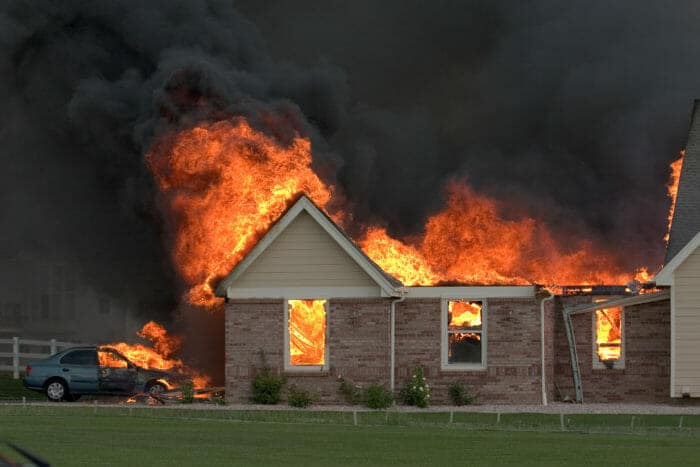 Smoke alarms are not designed for garages and attics and are much more likely to fail than a heat detector. Getting the right type of detector or alarm in the right places can save your home and your life.

What is the difference between a smoke alarm and a heat detector?

Smoke alarms are designed to provide people an early warning sign of a fire so that they have time to escape the fire; they do this through sensing smoke and sounding an alarm.

Fire officials recognize that all fires are not alike, so at times, they break them down into two basic categories: 1) “Fast Flame Fires” and 2) “Smoldering Fires.”

Because of the basic differences between the two types of fires, smoke alarms are designed to react more quickly to one type than the other.

Combination type    A combination or dual sensing alarm has both technologies incorporated into it; both the Ionization technology and the photo electric technology. The combination ones are usually the more expensive of the three types, however, they are becoming much more popular and in some building jurisdictions are now required. Smoke alarms have become increasingly important because times to escape a fire in a home have shortened tremendously. (Learn why)

Heat detectors are designed to minimize property damage by a change in temperature caused by a fire and thought of as a protector of property. Heat detectors come in two basic types:

Heat detectors responds to the heat of a fire, not the smoke of a fire.

Reasons for Not using smoke alarms in garages and attics

Smoke alarms are more subject to particles and contamination

Garages and attics tend to have more dust and particles in the air than rooms of a house, for most homes have an air filter on their furnace or A/C system. These filters help keep a home’s air much cleaner than the air in the attic or garage. Additionally, there is a much less likelihood that insects and other small creatures will get into an alarm in the house than in the garage or attic.

Heat alarms are engineered to be much less affected by the above conditions.

Avoid installing a heat alarm near fluorescent lights, for the electrical noise (interference) and flickering from the lights may affect the alarm’s operation. Also, be sure to read and follow the manufacturer’s installation instructions.

The majority of us do not take the time to fully read the specifications and limitations of smoke alarms or even the installation instructions of the ones we install. Therefore, we often use the wrong product for what we want to accomplish. It would be wise to follow the advice of the professionals and the US Fire Administration; also it is important to remember that that codes may differ somewhat from one building jurisdiction to another.

It is important to remember that our garages and attics often reach temperatures below 30 degrees or above 100 degrees, especially our attics in the summer time. Secondly, many fires start in the garage and that is one of the reasons that building codes require fire rated doors and wall assemblies between the garage and the rest of the house.