GFCI Outlets, Where Are They Required

Home » Electrical » Outlets & GFCI » GFCI Outlets, Where Are They Required 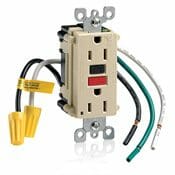 If you’re in the bathroom and you put your hand accidentally down in a sink filled with water, while holding a plugged in hair dryer; it may shock or electrocute you, if the outlet is not GFCI protected. The same is true in the kitchen, if you were holding an electric device and you accidentally put your hand in the sink while holding the device, it might shock, kill or injure you.

Where do you put GFCI’s

Remodeling – when an outlet, in any location where it may encounter water or dampness, is replaced or added in an existing home; then it is recommended to be GFCI protected.

Kitchen has been remodeled? – then it should have GFCI protection

Bathroom has been remodeled? – then it should have GFCI protection

My house is an older house and there is no ground wire. Can I still use a GFCI and will it work?

Now the building codes and building jurisdictions are requireing AFCI to be put in certian locations in a home built today. At times a contractor may use an AFCI outlet or he may use a AFCI breaker. ( READ MORE ABOUT AFCI’S )